The third stopover of the Wide Open project has been made in the megacity of Mexico City, an urban ocean of 8 thousands square kilometers – eighty times the size of Paris Proper.

WIDE OPEN: IN THE EXPLORERS’ SHOES

The third stopover of the Wide Open project has been made in the megacity of Mexico City, a urban ocean of 8 thousands square kilometers – eighty times the size of Paris Proper. From the 50s to the 80s, the city saw its population increase by 10 million inhabitants and the city occupies today 35 times the area it occupied in the 50s. This demographic and spatial boom has reinforced social and spatial inequalities: the city houses boroughs with a human development index similar to the Netherlands and others to sub-Saharan Africa. The metropolis faces significant challenges: corruption, insecurity, unequal access to water, despite these, Mexico City is a vibrant hub and one of the most creative and dynamic cities in Latin America.

In 2012, Miguel Ángel Mancera becomes mayor of Mexico City and in the following year entrusts Gabriella Gomez-Mont – artist, writer and documentary filmmaker – with the creation of an urban-innovation laboratory, which could create a new bridge between his government and civil society and promote citizens participation.

Thus was born the “Laboratorio para la Cuidad“, Latin America’s first urban innovation lab, aiming at exploring new methodologies and understanding of the city, identifying new opportunities for positive change as well as collectively addressing its challenges. Gabriella’s team is made if about 20 talented people, highly passionate about their city: designers, philosophers, architects, urban planners, data analysts, geographers, artists, as many creative profiles, not that common in the public sector. The average age of the team is 29, as a reflection of Mexico’s young population.

This third-place is a space for experimentation, debate and collective thinking: all sectors are invited to collaborate. The lab team, experts and external consultants from the public or private sector, students and even curious citizens come together and collaborate around six main themes: open city, playful city, global city, creative city, participatory city and pedestrian city.

This human density adds up into huge creative potential and civic capital, which needs to be unleashed and amplified. To build the city, it is necessary to work with the communities’ visions and collective will. No more strategies conceived in ivory towers. Far from a top-down approach, the lab’s field and human-centric approach brings the notion of the “right to the city” up to date: “the city is for everybody” not only the matter of an elite, it is everybody’s interest and responsibility. The lab is meant to reinvent the possibilities of citizen participation. In this hybrid space, experiments are orchestrated at the different city scales: from creating laws to recreate public spaces in marginalized neighborhoods, design a collaborative platform for crowdsourcing the new constitution, generate new tools for data-driven policy…

The lab’s field and human-centric approach brings the notion of the “right to the city” up to date: “the city is for everybody” not only the matter of an elite 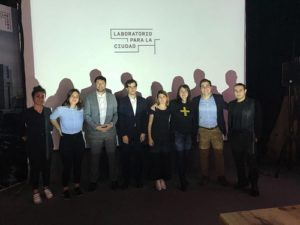 Many of these are prototypes which lessons will lead to concrete recommendations for the government, and that in some cases will be replicated or scaled-up. Being embedded into the public sector while collaborating with citizens and across sectors, the lab has the opportunity to drive systemic change, a systemic scope makes it possible to reintegrate experimentation – and thus potential error – into public processes. The space itself, through its independence and its art of the informal, helps change mentalities and depolarize discussions by offering a zone of neutral dialogue. Public authorities and civil society come together to solve concrete issues together: in 2015, it was thanks to a digital debate and its creative methodologies that the Lab helped resolve the violent conflict between taxi drivers, ubers and cabify.

Since its creation, the lab has already inspired the creation of 10 other urban laboratories in Latin America. For Wide Open, this pioneering ecosystem once again demonstrates the urgent need to create spaces for experimentation and freedom, to collectively rethink our models!

The next step of Wide Open project will be in Colombia, Medellin, at the heart of “Distrito Medellin”, a four-district experiment space, fully dedicated to positively transforming the city, in a 2.0 participatory approach.