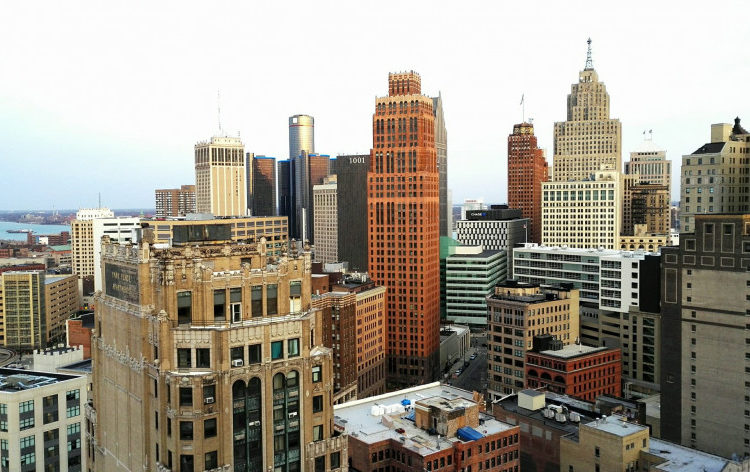 Detroit is the first step of the Wide Open project, a tour of the world of exploration of third-places of positive innovation.

While the former capital of the automobile was declared officially bankrupt in 2013, Detroit is reborn today from the ashes, thanks to many initiatives of revitalization, carried by various actors:

All united to ensure the come-back of the Motor City.

THE RENEWAL OF DOWNTOWN DETROIT

After years of demographic decline and the abandonment of many properties, the development of Detroit is now experiencing a rapid acceleration: since 2006, tens of billions of dollars have been invested in commercial and residential construction projects. Its downtown, once deserted and desolate, is now teeming with young executives or creatives, and its landscape covered with cranes, is changing at great speed. 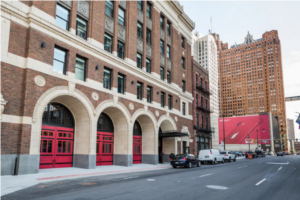 The story of Detroit is unique – from the auto industry boom, to bankruptcy, to Motown’s counter-culture movements. This rich and complex liability now gives the city a very attractive architectural and cultural heritage. Rather than replace the buildings, some investors sensitive to the stamp of the city, have chosen to restore the old buildings. Respecting the original models, they revive the character and charm of this architectural heritage. Many have made this choice, so the city of Detroit is today seen as the most ambitious renovation project in the United States.

A project that embodies this orientation is the Detroit Foundation Hotel, which opened in 2017 in the former Detroit Fire Station, dating from 1929. The five-storey marble floor is original, as are the glazed brick and three fire escape bars adorning the hotel’s restaurant, offering the building an inimitable charm.

This movement is also indicative of Detroit’s strong ambition: to combine revitalization and positive innovation. By adopting the principles of circular economy in its renovations, the city gradually deconstructs the negative image of its urban landscape and proves that its ruins are also its riches.

During their immersion in the old Ghost City, our two explorers of the Wide Open project, discovered the Motor City Mapping, a public database of identification and information on the properties of the city, facilitating in particular the collective projects and citizens of renovation.

This platform, created by two local actors, the start-up Loveland Technologies & the Data Driven Detroit association, maps the entirety of Detroit’s properties (including vacant spaces and ruins). Each citizen can thus contribute to the platform, thus allowing to refine the information on each lot: state, price of sale, occupation or holidays, is a demolition suggested … Everyone can feed it in real time , adding a photo, location or information. The website with its simple and accessible design already lists nearly 400,000 parcels!

AT THE SERVICE OF THE PUBLIC AUTHORITIES

The first step towards the revitalization of Detroit is through a thorough knowledge of its territories. This tool has enabled the city to know the exact quantity of abandoned buildings and especially to distinguish them: 6,255 plots used as landfills, 6,845 structures with fire damage, 27,730 structures requiring barricades … essential information for decision-making enabled municipal departments and suppliers to co-create an action plan aimed at addressing the issue of building rehabilitation, a major challenge for the city.

IN THE INTEREST OF THE LARGEST NUMBER

The tool is not only useful for public institutions. In most neighborhoods, people now know they can, by visiting the website, know the buildings in seizure or just learn more about the properties. To encourage residents’ participation, a payment of $ 1 per registered parcel has been put in place. There are also trainings to help them take full ownership of the tool. In addition to being a demonstration of the performance of real-time data in the resolution of complex urban issues, the Motor City Mapping embodies a model of collaboration and sharing of data, in the interest of all. Federating local actors, empowering and informing citizens, bringing out new opportunities for real estate players … This tool also adds an inclusive and collaborative dimension to the concept of the smart city. Building on its success, the project is now nationally developed under the name of Loveland. Interest? Make visible the invisible map of the property, across the United States.

Related Articles
Ponyride: a third-place for a more inclusive and sustainable Detroit
The Build Institute, a Detroit-based ethical incubator